Written by
admin
Posted in
perfume
Comments
Leave a comment 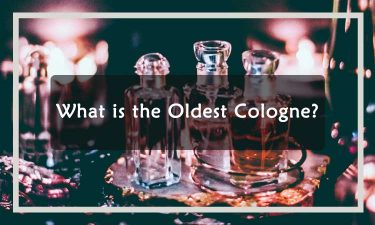 Cologne is a kind of perfume. But it has a comparatively light refreshing unisex fragrance. Cologne generally has a citrus-based light headnote. Since perfumes are our daily accessories, the question may arise in your mind- what is the oldest Cologne? Then here comes the answer.

Cologne is a kind of fragrance that generally contains two to five percent concentrated perfumed oil with other blend ingredients. Alcohol and water are used as solvents.

What is the Oldest Cologne?

Giovanni made a subtle perfume and named it ‘Eau de Cologne‘ after the name of the city Cologne as a gratitude to the city dwellers. ‘Eau de Cologne‘ means the water of Cologne. The name is written in French because it was the language of high society then. Later this name becomes a generic term for perfumes containing a low concentration of citrus-based essential oils. Now it is sold as ‘Farina 1709‘.

At first, the perfume was called ‘Aqua Mirabilis,’ which means miraculous water. Because it was ascribed to have antiseptic and healing power, it was believed that Eau de Cologne had the power to counteract the bubonic plague. If you drink Cologne, the Cologne will be oozing through pores averting fleas away.

Giovanni Maria Farina was a German perfume and is the creator of the first Eau de Cologne. He was born in Italy. Later, Marina settled in Cologne, Germany, for business reasons.

In the 18th century, the running water was not clean and healthy always. So people often took a quick wash without using water. They used a mixture of essential citrus oils and alcohol to clean themselves.

Since the day of starting the production until today, the recipe of Eau de Cologne is still a secret. It has not been revealed yet. Many imitations had been produced though they did not smell like the original one.

After discovering the Farina 1709, Maria Farina wrote a letter to his brother in 1709. In that letter, he told me that the fragrance reminds him of the orange blossom and mountain narcissus just after the rain of a spring morning in Italy. He also depicted the perfume as refreshing and strengthening.

At first, breath, you will get the refreshing and elegant citrusy notes of bergamot. This mild spicy tone is followed by tender jasmine aroma with a sweet, airy, and dewy floral note of violet. The base note is constituted of milky woody note of sandalwood and spicy balsamic fragrance of olibanum.

The perfume is produced and packaged by Farina gegenüber. The Cologne was delivered in a green slim Rosoli bottle until 1832. The bottle had to be horizontally kept because it was corked.

This Eau de Cologne is very much costly now and then too. As it is the first and was the only Cologne of that time, people wanted to get it at any cost. A single pepper castor of this Cologne costs almost half of the annual salary of a civil servant.

The trademark of this factory is a red tulip. The factory is still in production and makes perfumes. Farina gegenüber held the royal warrants as a provider of fragrance to the German, Italian, British, and French royal families.

The perfume is still in production by the eighth generation of Farina.

In the 18th century, the water of Cologne became famous worldwide rapidly. And thus, the Cologne became a must accessory at every royal court. This Eau de Cologne was delivered to all royal houses in Europe as a perfume for royal courts.