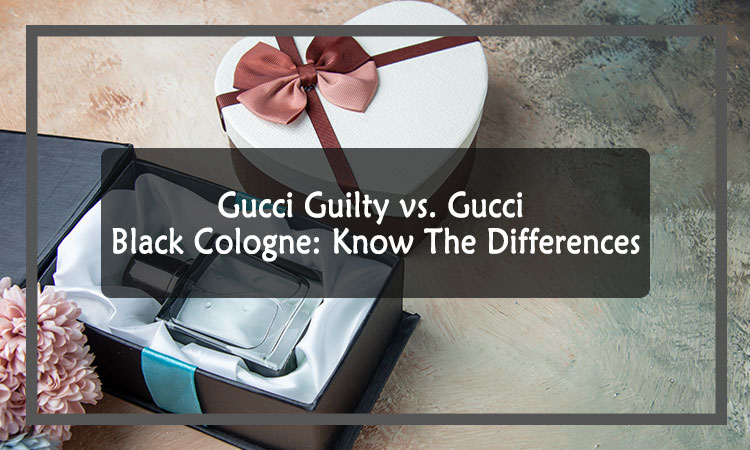 Both are unique and attractive in their own way, and the perfect one can work like magic. Not only will you feel confident, but you also will be able to create a strong impact on people around you. But for that magic to occur, picking the right one among the two best products is one hell of a work.

We know how hard it can be. Hence, to ease the situation for you, we have discussed the differences between Gucci Guilty VS Gucci Guilty Black. So you can know the perfect one to pick for you.

Since the release of both the colognes, a fierce battle is going on between Gucci Guilty and Gucci black cologne regarding which is a better option.

Well, there is nothing basically you can do as both of these scents are soo good that it makes the picking decision harder than ever.

Therefore, to help you pick for yourself, family members, or even for the man of your life, we will try to discuss both the colognes in as much detail as possible.

So you can get a good overall idea about both the colognes. And then you can decide on the exact one based on your preferences.

Let’s start our journey in knowing about two of the best colognes in the world gifted to us by Gucci:

Gucci Guilty cologne is a woody aromatic cologne specially designed to go with every age of man perfectly. It was launched in 2011, but it is captivating hearts since then to the present date.

In fact, to your surprise, it also remains on the best-selling cologne list per year. Why?

Well, the leading reason behind this is its specialty and deep thinking poured while making this cologne. In other words, this cologne knows what man wants in their cologne to have.

Hence, it needs no further telling that this cologne is indeed like a dream come true for the man who loves to have a fresh and tempting aroma in their everyday life. Let’s have a look at the below features that this cologne has to offer:

This cologne is a combination of both masculinity and luxury that works like charisma for attracting a woman. Who knows, the woman you may have a crush on for several years finally approach you?

Well, it has the power to work out things between your woman and you by acting as a magnet in a very seductive and stimulating way among you both. Upon opening, you will find yourself in a bombshell of lavender and lemon with an extremely tempting orange blossom aroma.

Next, to spice up things more, the warm woody mixture of cedar and patchouli will come up to support the top and middle notes.

Worry not; the smell is not overwhelming; instead is light enough not to irritate anybody’s nose. It’s just will make you feel appealing along with your partner to do the trick.

The bottle of this cologne is crafted using a cold metal and heavy glass to give an aesthetic attire. Both your eyes and nose will get driven towards it the moment you set your eyes and have a sniff. It is available in various shapes ranging from 30 ml, 50 ml, to 90 ml.

Now moving to the projection and longevity, it has a relatively decent moderate level sillage, enough to make things work out in your favor. And has a longevity of around 5 to 7 hours.

You can wear this cologne at any time of the day and night with any casual or party wear throughout the year. You will still become the center of the show.

But if you want a precise answer, then the summer season is the best time to use this cologne for matching the vibes of a hot summer day.

One of the complaints regarding this cologne is they are not as long-lasting and intense as Gucci Guilty Black Pour Homme has proved to be in the past years since its release.

As an original version of the Gucci Guilty, this cologne will still hold its position and will be favored among all the other colognes in line.

So if you want to use the original scent that has a blend of masculinity and elegancy, then Gucci Guilty is the right call to make.

The Gucci Guilty Black Pour Homme is one of the best colognes a man can possibly have and want in their cologne to contain. It was launch in 2013, and since then, it is continuing its journey of enchanting hearts successfully through its magical smell and sensation.

Right from its outlook to its smell, this cologne screams out the attraction, sensuality, and temptation and thus is the perfect one to use for a special night out.

It is just a perfect combination of masculinity, sexiness, and luxury that a person can get through the use of this Gucci Black perfume. In short, it is an ideal cologne a man can have to enjoy their life to the fullest.

The smell of this cologne is so tempting and alluring that you will find your confidence level increasing to the next level right upon applying. It is full of inspiring and seductive notes to make your woman fall for you instantly.

At first, you will find yourself bombarded with an explosion of refreshing green coriander and lavender that will trigger your youthful confidence.

After then, comes the middle notes to pledge masculinity with its rich and enchanting combination of neroli, orange blossom, and verdant fragrant notes.

Lastly, to make things more exciting and appealing comes the lavish and intense mixture of cedarwood and patchouli. The smell is neither too overwhelming nor light; instead is just on-point from all perspectives.

All these represent a perfect blend of notes to offer the best possible scent a man can dream of having on their date nights.

This cologne bottle comes with artistic vibes that are sure to attract your eyes and nose the moment you have a look at it and take a smell. You can find this cologne in two shapes: 50 ml and 90 ml.

Compared to the Gucci Guilty, this black cologne from Gucci has a more powerful and consistent projection with every wear. And for longevity, they also last for a longer time than Gucchi Guilty, with having a lasting power of 10-12 hours.

You can wear this cologne at any time of the day and night at any season throughout the year. It will still make you the limelight of the show by driving the attention towards you.

Frankly speaking, there is basically no remarkable complaints encounter under its name. Instead, this cologne has exceeded the predicted expectations by beating all the fragrances in the first series line.

Gucci Guilty Black will let you explore a more intensified and seductive version of Gucci Guilty. Therefore, it is definitely worth giving a shot of your time and money.

And is the one to go for if you want a spell-binding magic smell with the lowest failure rate in bringing the desired output.

Scent is something that you should never compromise with as the right one can make wonder for you. On the other hand, the wrong selection can ruin both your day and date.

Hence, you should always wear the perfume that goes flawlessly with your personality to bring out the best version of you.

Among Gucci Guilty Black VS Gucci Guilty, it is hard to pick one the winner as both scents are incredible in their own unique way. Hopefully, you now have a clear idea about both the colognes and finally know which one to go for.

However, If you are still having second doubts, then it is suggested that you go to a nearby local store, have a sniff of both the colognes, and then go with your guts feeling.

Great smell unique. One of my favorites ever

Too smoky for me.

BY THE FIREPLACE
Calvin D. Johnson